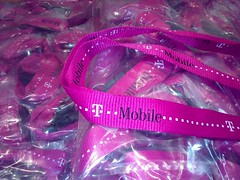 Well, this story has to rank as one of the more interesting so far in 2014.  It seems wireless provider T-Mobile has trademarked a color that they insist competitors cannot use in any promotional way.  The color in question is a variant of magenta (i.e. plum) and T-Mobile was able to convince a Texas judge the color is so strongly associated with the company that customers would be confused if competitors also used it.

The decision is the result of a lawsuit brought by T-Mobile against Aio Wireless, a subsidiary of AT&T.  The judge sided with T-Mobile, though her arguments seem to do more with how the company has consistently invested in the use of the magenta color in its branding and less to do with whether the use of magenta by competitors may confuse customers.

Assuming the judge is correct, (and we are certainly not lawyers here at KnowThis.com!), the argument for trademark infringement seems to be based not only on possible confusion but also on the investment a company has made in building a brand, including use of certain colors.

To us non-lawyers it would seem this is a strange decision and that this issue is far from being settled.

Court Supports Trademark for a Color   (2021).   From Trends and Developments. KnowThis.com.   Retrieved   September 24, 2021  from   https://www.knowthis.com/trends-developments/court-supports-trademark-for-a-color/