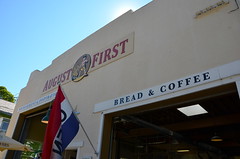 Each day thousands of small store-based retailers are confronted with a daunting challenge – compete against the low-price strategies offered by big-box stores and online sellers. Yet, for most small stores, competing on price is usually not a good idea as few possess the purchasing power to buy products from suppliers at the same price level as the big guys. Instead, most small retailers have discovered success more often lies in strategies that focus on targeting niche markets with unique or personalized product offerings that are backed by excellent customer service.

As an example, consider a local coffee shop or caf?. These retailers often appeal to a small group of customers, who prefer freshly prepared food and drink. They are attracted to these establishments because of their convenient locations (often within walking distance), welcoming atmosphere (small, charming interior) and, of course, free WiFi. These customers enjoy sitting for a while as they chat, tweet or play with their tablets or laptops.

For the small caf? operators, you would think a store filled with customers sitting around talking and playing with their technology is a marvelous thing, right? Well, according to this National Public Radio story, it may not be so good, at least for one Vermont caf?. This retailer, August First Bakery & Caf?,has banned the use of tablets and laptops in their store. While this may seem to be an act of business suicide, their rationale for such drastic action is actual quite interesting. From the August First’s perspective, customers who cozy up to a table with their tablets and laptops are spending too much time in the store and not spending enough money. Additionally, and probably more importantly, by taking up store space other customers who are passing by, and who may have money to spend, may decide things are too crowded and will not enter.

Initial results indicate August First’s owner is likely correct in her decision as sales have risen since the ban was implemented. However, a decision like this can be risky. Unless a retailer already has a sizeable customer-base, a radical decision like this could backfire.

If a Small Caf? Says Goodbye to Free WiFi Will It Say Hello to Increased Sales?   (2021).   From Trends and Developments. KnowThis.com.   Retrieved   April 17, 2021  from   https://www.knowthis.com/trends-developments/if-a-small-cafe-says-goodbye-to-free-wifi-will-it-say-hello-to-increased-sales/