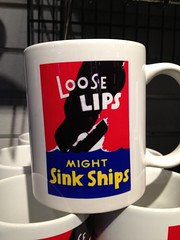 When it comes to keeping secrets, there is a great old saying: “Loose lips sink ships.” This saying was originally developed during World War II by the U.S. War Advertising Council to warn people not to speak about the movement of naval vessels for fear the enemy would find out. In the marketing world, executives often invoke this phrase in staff meetings to stress the importance of keeping quiet about upcoming marketing plans.

Indeed the key concern when an executive announces a “loose lips” directive is so that competitors will not learn about strategic plans before these are implemented. If they do, the marketer’s element of surprise is lost and so too may be their marketing advantage. Consequently, depending on the importance of the plan, if a company discovers an employee has discussed the plan outside the marketing department’s inner circle, the employee could face tough justice including possibly losing their job.

Yet, controlling the talk about secret plans is a bit harder if the one talking is not a company employee.  An example of what may be a “loose lips” situation by a non-employee can be seen in this Los Angeles Times story. It reports on rumors circulating about Amazon opening hundreds of brick-and-mortar stores. The rumors appear to have started when an executive for General Growth Properties, an operator of 120 retail properties including shopping malls, mentioned Amazon’s plan during a conference call with investors and business media. Amazon has declined to comment and likely is not happy with the remarks if, in fact, expansion into physical stores is something they are indeed planning.

But, let’s assume the rumors are true. What would motivate Amazon to move in this direction given the dominant online selling model they already possess? Wouldn’t this be a bit counterintuitive given how it seemed their goal was to crush real bookstores? Well, not really. Amazon knows there still is a market for selling books (and other products) offline. They understand that some people enjoy visiting bookstores where they can take their time browsing then sit and enjoy a coffee and a snack. To address these customers, Amazon has a powerful weapon – data. The amount of information Amazon has compiled when people visit their website is staggering. And if they decide to launch retail stores, the information that will be especially valuable is obtained by filtering data by geographic location. This information would enable Amazon to stock stores with products they believe are likely to be in demand within a specific area. In fact, Amazon’s information is so detailed, the inventory in stores located, say 20 miles apart, could be noticeably different given the makeup of customers that reside near each store.

While to some degree retailers are already assigning inventory by location, at best this is done at a regional level (e.g., all stores in southern Florida carry the same inventory) rather than at the individual store level. In which case, Amazon’s potentially innovative inventory methods could be a game changer for all store-based retailing.