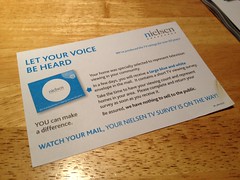 The general belief among many is that television advertising is losing significant ground to other forms of advertising, such as digital ad options. In large part, this view is assumed based on the proliferation of TV program viewing options (e.g., on tablets, on DVR, on content services such as Netflix). Yet, even though viewing options are becoming much more fragmented, in reality, television advertising remains an attractive choice for many advertisers and still garners over 38% of all global ad spending.

While many marketers may misunderstand the state of television advertising, almost all agree that methods for measuring audience viewership are becoming more difficult to implement. In particular, measurement is being complicated by the same multiple viewing options that have confused marketers about the general state of television advertising. For instance, should someone be counted as a viewer if she records a program but does not watch it until more than a week after a show is originally broadcast?

The importance of valid viewership numbers is critical for both networks and advertisers. For networks, the number of viewers is a crucial factor when setting their advertising rates. For advertisers, audience measurement is key for determining audience demographics, which they use for targeting purposes.

For years, marketers have wondered what will happen with audience ratings. They were particularly interested in how the company that dominates audience measurement, Nielsen, plans to address these issues. Well, as discussed in this Fast Company story, Nielsen is tackling the measurement question by introducing a “total audience measurement” approach that counts viewers across multiple devices and up to 35 days after a program first airs.

The story presents an interesting graphical breakdown for one test show and the devices that are being measured. It also offers an excellent historical reflection of Nielsen’s role in the audience ratings business.

The Challenge of Measuring Who is Watching Television   (2021).   From Trends and Developments. KnowThis.com.   Retrieved   October 15, 2021  from   https://www.knowthis.com/trends-developments/the-challenge-of-measuring-who-is-watching-television/