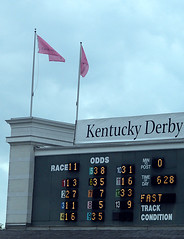 This weekend is one of those special times when sporting events will dominate television. In particular, three events – the Kentucky Derby, the Floyd Mayweather and Manny Pacquiao Fight and the National Football League player draft – are likely to attract hundreds of millions of viewers. While there are certainly other sports occurring this weekend, such as baseball and golf, the marketing activity that takes place as a lead up to big-time events dwarfs that of standard sporting contests. The reason is simple – there is enormous money in special event sports. For instance, the Mayweather-Pacquiao battle is predicted to generate over $300,000,000 just from those watching the contest on pay-per-view. The Kentucky Derby may attract nearly 160,000 paying customers and high advertising dollars from companies craving the over 15 million watching on television. The NFL draft, which is spread out over three days, also offers huge advertising dollars to both ESPN and the NFL Network.

While these sporting events are very different in terms of the competition taking place and, possibly, the customers they are targeting, marketing plays an enormous role in each. This can be seen in obvious ways such as through television, print and online advertising promoting the event, but in a less obvious way each of these events relies heavily on the news media to build customer interest. As we note in our Types of Public Relations Tools tutorial, the task of building customer interest through the news media is performed by PR professionals. And, one of the main ways they build a trusting relationship with the media is to respond quickly to media requests for information. For instance, a PR professional handling media relations for each of these events makes sure access is provided to those running the events, such as Roger Goodell, the NFL commissioner and Kevin Flanery, the president of Churchill Downs where the Kentucky Derby is run. Even though these executive are highly skilled at dealing with the media, they still require a strong PR staff to provide assistance, such as prepping them with key talking points.

Public relations also tries to make sure the athletes in these events (i.e., players, fighters and jockeys), also understand the importance of talking to the media. However, unlike those in charge of the event, athletes may not fully buy into the media’s role. This was evident during the 2015 Super Bowl when Seattle Seahawks running back Marshawn Lynch had his “I’m just here so I won’t get fined” talk with the media.

So while watching these events this weekend, keep in mind that interviews with any of the participants is likely occurring thanks in part to the efforts of the event’s PR staff. Moreover, what some of these folks say may, in part, have been prepared for them a PR professional.