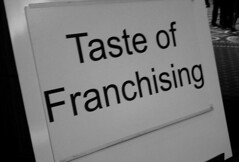 Historically, if an entrepreneur is looking for the best option for being successful in a store-based retail business the best option is to join a franchise operation rather than trying to start a retail outlet from scratch. As we discuss in our Retailing tutorial, a franchise is an agreement by one party (the franchisee) to operate, for a fee, a business that has already been established by someone else (the franchisor). As we note, one important advantage of such an arrangement is that the franchisee often gets a running start in attracting customers since the business has already been established by the franchisor. Consequently, there likely already exists some name recognition in the area where the franchisee’s retail outlet will be located. Additionally, a franchise buyer can receive training in operating the business, thus flattening the business learning curve.

Also, those who are successful running a franchise can be rewarded by being approved to buy additional franchises to the point the some franchisees can own hundreds. For instance, many of the most successful franchisees own over 100 individual franchise locations.

Unfortunately, the idea that a franchise is a good way to get into retailing may be fading. According to this Wall Street Journal story, while the number of people buying into a franchise system has increased, the number of problems arising with franchise owners has escalated. One of the key issues is that the number of businesses listed as a franchise operation has skyrocketed. However, the quality of these new retail options has sometimes been difficult to determine. In many cases, doing due diligence when acquiring a franchise (which is highly recommended) has also become a problem as many franchisors are not entirely forthright with information.

For anyone interested in franchising, this story includes good information on what needs to be researched before committing to buying a franchise. It also lists important information sources that should be consulted.

Image by Re: group

When Buying a Franchise Watch for Warning Flags   (2022).   From Trends and Developments. KnowThis.com.   Retrieved   June 28, 2022  from   https://www.knowthis.com/trends-developments/when-buying-a-franchise-watch-for-warning-flags/

When Buying a Franchise Watch for Warning Flags   (2022).   From Trends and Developments. KnowThis.com.   Retrieved   June 28, 2022  from   https://www.knowthis.com/trends-developments/when-buying-a-franchise-watch-for-warning-flags/