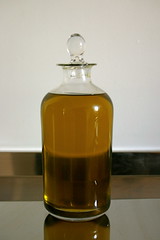 As we noted in a 2013 post that looked at labels found on eggs, it is pretty safe to say, what appears on a product label is not something that takes up a large portion of a marketers’ valuable time. In fact, when it comes packaging decisions, marketers are often  more concerned with the shape, functionality and other design elements of the container, rather than the words and images appearing on the box, bottle or other items used to hold a product. Yet, not focusing enough attention on labeling can come back to haunt a company. For instance, back in 2014 we looked at how an issue of a misleading product label made it all the way to the U.S. Supreme Court.

Another example of what may be a misleading labeling issue can be found in this story from Fortune. It reports on lawsuits claiming the labels on top selling olive oil brands mislead customers in two ways. First, the lawsuit claims the labels state the olive oil is “Imported from Italy.”  However, while the bottles are packaged in Italy, the actual olive oil is sourced from other countries. Second, the lawsuits claim the olive oil contained in the jars is not of the extra virgin variety as listed on the label. Rather it contains a lower-grade product.

The companies being sued have so far responded by dismissing the allegations. For instance, they appear to argue that “Imported from Italy” only means the product has to be shipped from Italy. The plaintiffs in this case believe this violates the Country of Origin Labeling requirements that was included in the Farm Security and Rural Investment Act of 2002.

While it will likely take some time for these cases to be resolved, the issues raised are certainly ones that should encourage some marketers to spend a little more time reviewing their labels.

When is a Product Label Really Misleading?   (2021).   From Trends and Developments. KnowThis.com.   Retrieved   March 08, 2021  from   https://www.knowthis.com/trends-developments/when-is-a-product-label-really-misleading/