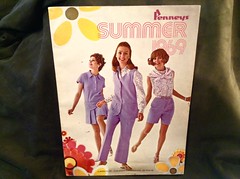 At one time, the catalog was considered a big deal in U.S. retailing. Leading retailers, most notably Sears, would produce numerous catalogs every year, each consisting of hundreds of pages. These direct mail pieces were shipped to homes, where customers would page through a catalog and then place their order by phone or, in the years before the telephone, by mailing a print order.

For most retailers, the days of catalogs are long gone thanks in large part to the Internet and e-commerce. While Sears built its business with catalog sales, they are now barely surviving, with many blaming the retailer’s struggles on their slow response to recognizing the Internet’s impact on retailing. Other big catalog retailers, including Montgomery Ward, have also gone away.

So it is a bit curious that another struggling retailer, JC Penney,  is returning to the catalog business. According to this Entrepreneur story, after a nearly six-year absence JC Penney is once again sending out catalogs. As the story notes, the new catalog is very different from the last one they mailed in 2009, which contained over 800 pages. This one is a much skinner version, 120 pages, and likely serves more as an alternative to looking at products on a computer screen, as the actual purchase is still mostly made online.

JC Penney’s return to direct mail catalogs may also be an indication the company is beginning to feel they are on the road to recovery. Of course, given the incredibly competitive environment that is retailing, that road to recovery may require they come up with many more interesting marketing ideas.

While the Old Fashion Catalog Makes a Comeback, Its Purpose Seems to Have Changed   (2022).   From Trends and Developments. KnowThis.com.   Retrieved   August 11, 2022  from   https://www.knowthis.com/trends-developments/while-the-old-fashion-catalog-makes-a-comeback-its-purpose-seems-to-have-changed/

While the Old Fashion Catalog Makes a Comeback, Its Purpose Seems to Have Changed   (2022).   From Trends and Developments. KnowThis.com.   Retrieved   August 11, 2022  from   https://www.knowthis.com/trends-developments/while-the-old-fashion-catalog-makes-a-comeback-its-purpose-seems-to-have-changed/